The “Right” Melting Pot: Call for Disguised Diversity in Over-the-Rhine

Diversity—a single word that embodies an American ideal of variety. When we Americans hear the word, we tend to think positively about inclusion of differing ethnicities, social classes, and values; none are secluded within this ideal. In light of this general positive mindset, when could a call for further diversity in a city, or in a neighborhood, ever be a threat to this inclusiveness?  As someone who has taken both a look back and a present look at some of Cincinnati’s and Over-the-Rhine’s most cherished public spaces, Findlay Market and the Washington Park area, I find a call for diversity becomes a threat when existing diversity is discredited. 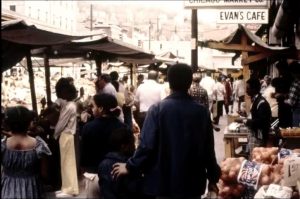 Findlay Market in the 1980s, where it served as both a market of food and community. When asked about Findlay Market’s role in the community during the time, an Over-the-Rhine resident responded, “The people that have been living around here for years, this is, to them, more like home than anywhere else.”
(Community Media Productions. Screenshot from We Will Not Be Moved documentary. 1980. Vimeo. Web. 29 Nov. 2017).

Since 1852, Findlay Market has been an integral part of Cincinnati as a source of both food and community. Vendors spanning multiple generations have provided a wide variety of food, exchanges of fresh, affordable food and fresh perspectives echoing down through the decades. What has truly defined Findlay Market, however, has been the sense of community. Ethnically and socially diverse Over-the-Rhine residents consider Findlay Market as an information hub, a place where local events are discussed, where familiar faces are found in the midst of unfamiliar, and where all are welcome to air their views.

However, since the private organization of The Corporation for Findlay Market took over public marketing operations in 2004, a vision statement for Findlay Market as a socio-economic center has been pushed on Findlay Market’s website, a hope expressed that the neighborhood will “transform” with “walkable safe streets” and will “attract legions of new residents from around the world” (Findlay Market, “Our Vision”). With the streets implied to be “unsafe” with current neighborhood residents and higher-income developments now surrounding the market for these new residents, the current social diversity of Over-the-Rhine is threatened, deemed unfit; “out with the old and in with the new” is the message given under the guise of increased diversity. 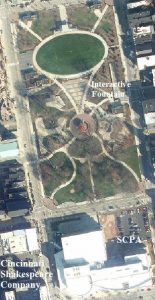 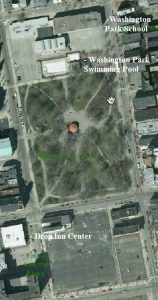 Another instance of this threatened diversity came through the cultural sway of the arts over Cincinnati. With the establishment of the School for the Creative and Performing Arts (SCPA) on Central Parkway as a further outlet of Cincinnati arts, community residents eventually lost access to Washington Park School, the last public elementary school in the neighborhood, as well as the Drop Inn Center homeless shelter, a refuge for those in need of a place to stay within the community. In the promotion of cultural diversity through the arts, the current residents’ diverse needs of public education and temporary housing were pushed aside and pushed out, leaving behind a cultural movement that moved in without their permission or their inclusion.

With these two public spaces in particular, I think it evident how the call for diversity can be used to implement the “right” kind of diversity in Over-the-Rhine—in other words, the variety of social and economic demographics that will become marketable for the neighborhood. In Findlay Market, the generations of residents that have used the space as a community hub are passed over to attract those outside to become new residents, often paired with more capital. In the Washington Park area, the varying needs for current community residents were discarded for the city of Cincinnati’s cultural need for the arts. When diversity excludes instead of includes, should it truly be called “diversity” at all? 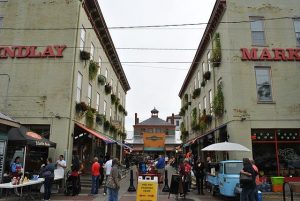