What does O.T.R. need? – More questions than answers

Over the Rhine has always been a neighborhood that takes care of itself. In the 1970’s and 1980’s, there was an incredible amount of disinvestment in the community. But the residents made sure people had what they needed. They fought for affordable housing, services for the mentally ill, and education amongst other things in what became known as “The People’s Movement”. Many of the organizations still here today came out of this movement including Peaslee Neighborhood Center, Shelterhouse (formally the Drop Inn Center), and Tender Mercies. But as new residents move in and the wave of gentrification really takes hold in OTR, do people still really know what the neighborhood needs?

The way that Over the Rhine, and its “savior” 3CDC are depicted in the media shows an OTR that doesn’t need much these days besides more development, more apartments for young professionals, a wider selection of craft beers and, of course, more bars. It is the slight, almost sometimes unnoticeable rhetoric used around the development in the neighborhood that leaves out a whole side of the story and ignores the needs of the people who have lived here for decades. For instance, a recent article was published in the Cincinnati Enquirer about how 3CDC has really fostered a local events scene. They are quoted as trying to create “events that meet all kinds of people’s needs”, yet it doesn’t take a genius to look at Washington Park yoga or a beer garden festival and see a demographic of mostly upper middle class white people. In another example, a British media outlet called City Metric recently published an article on investment in public spaces stating, “In Cincinnati, developer 3CDC transformed the notoriously crime-ridden Over-The-Rhine (OTR) neighborhood into a young professional paradise”. They go even further and say the places 3CDC “transforms” are designed to “attract productive young people to otherwise dull neighborhoods”. These words imply that OTR was not filled with life or productive people before. Yet before gentrification began and people started getting pushed out, it was filled with caring people who were willing to fight to take care of each other despite being ignored by the city and outside investors. 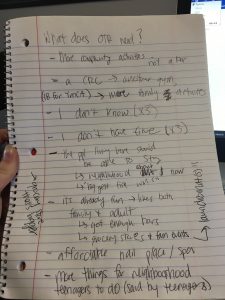 I decided to take my question to Washington Park to see what people actually thought about the needs of OTR today, as the media tends to give an outside looking in perspective. I asked a mix of older and newer residents. While I had a lot of people tell me they genuinely didn’t know, there were a lot of diverse answers. A group of teenagers told me they needed more places where they could hang out like the CRC or more basketball courts. Another woman waiting for the streetcar told me she likes that OTR is seen as a fun place to live, but she wishes there were more family events where everyone is welcomed. A man dressed in a suit told me subsidies for low income housing.  A young teacher told me she wanted all of the people living here to be able to stay, and those that had been pushed out, to find housing. She mentioned that whoever has the most money in the neighborhood is the big fish and “the biggest fish wins,” which isn’t right. Others said a bigger grocery store, an affordable nail salon, the return of mom and pop stores and a laundromat.

Almost everyone I talked to in the park realized that gentrification is occurring. Although the media never calls it that, gentrification is not some big secret. Many mentioned it by name but others just mentioned more of the after effects of it: the bars, expensive stores, removal of public spaces etc. A handful of the newer residents I talked to even knew that they were a part of the gentrification wave and that the development here has been far from equitable. So, I guess the real question here isn’t if people know what OTR needs, because people seem to have good ideas- but how do we get people to actually do something about it? It’s one thing to acknowledge that people are getting pushed out as you move into your $250,000 apartment. It’s another thing to affect change with your actions and become a part of the solution. So how do we get newer residents motivated to make the community better for everyone? How do we bring people together to enact the positive change that needs to happen in order to salvage some sort of equitable development here? Is equitable development even possible at this point?  Per usual, I am left with more questions than answers.