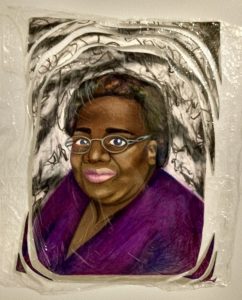 Her multi-colored eyes and hair show who she truly is, which is a creative, strong, intelligent woman. The background shows what doctors and society have projected onto her, which is far darker than who she is. As the picture expands it breaks apart, as the diagnoses have pulled her life apart, but her identity has remained unscathed in the center. The drawing is covered in cling film to represent the defenses that June has had to utilize throughout her life.